Home » Blog » Philosophy » Concert for the Kimberley is HUGE!

Concert for the Kimberley with 20,000 people!

The message for little Colin Barnett was pretty clear on Sunday when approximately 20,000 people turned up for the Wilderness Society’s Concert for the Kimberley.  But was he listening?  Does he ever listen?  Do any politicians ever listen?

Are you listening Colin?

No Gas at James Price Point!

Hopefully the other political parties will see this as an opportunity to come and take a stand against the Gas Hub at James Price Point, rather than sitting on the fence as they usually do.  As Facebook and other social media sites go berserk with thousands of images of last Sundays concert lets see what happens.

John Butler, Missy Higgins, Ball Park Music (super hi energy band over from Melbourne), Bob Brown and all the amazing crew from the Wilderness Society deserve a huge thanks for raising the profile of this very important cause.  Its not just about James Price Point, its not even just about the Kimberley, its about saving environment from crazy uncontrolled industrial development, and even more important, its about getting our Government to do what they are supposed to do, what is right, not what one crazy dictator wants at all costs!

Colin Barnett is the problem here, not the oil and gas companies, the Government are the ones we are fighting.  The resources companies are just behaving like all multinationals do, they have one motive (profit) and they will do whatever they can get away with to achieve it.  One of the most crucial roles of Government is to regulate the behaviour of these single minded corporations (and individuals, Gina Rinofart, Andrew Forrest and Clive Palmer spring to mind).  But what we have here is the Government being the developer, and one man who is meant to be the Premier, is also the minister for State Development… So the State Government, firmly headed by Colin Barnett in his duel roles, is driving this whole Gas Hub at James Price Point deal.  This seems like a huge conflict of interest to me.

No Gas at James Price Point!

Government is supposed to respond to what the people want, that is a democracy (or should be).  The people showed what they want very clearly on sunday’s concert for the Kimberley, No Gas at James Price Point!

One final question, why do they always put “The Honourable…” in front of a politicians name?  As in the Honourable Colin Barnett…  is it a belief that by saying it (or writing it) over and over will magically make it true?  or that we the people will believe it?  or that its just a smokescreen for some extremely dishonourable behaviour?  I think this title should be earned, not simply given with election, To all our politicians out there, prove you are honourable.

The march down Collie St, Fremantle

Bob brown doing what he does best of all

John Butler and Beleza Samba School and the grand Finale 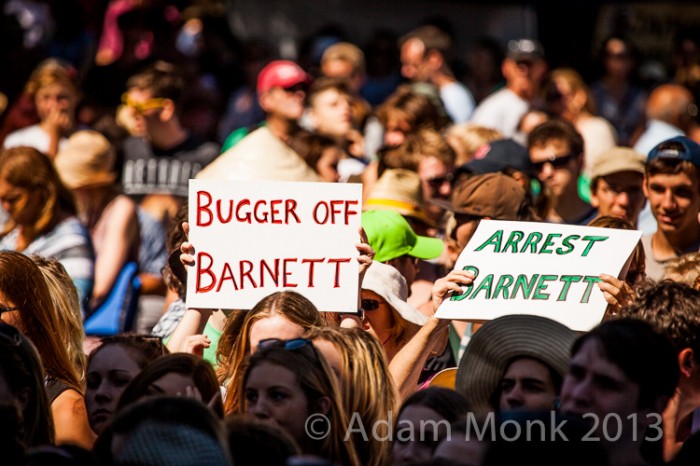 and one final message for Colin